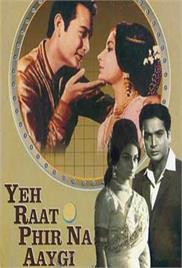 A widower Professor, who lives a wealthy lifestyle in Northern India, along with his daughter, Reeta, who is engaged to Suraj, is presently conducting an archaeological excavation along with the help of his assistant, Rakesh. They come across skeletal remains of a female corpse as well as a well-sculpted statue. Subsequently he is displeased when Reeta tells him that Suraj is showing an unusual interest in a woman named Kiran. He gets to meet her during his daughter’s birthday party and notices that she is wearing jewelry similar to the one worn by the corpse. Further investigation reveal that she has been killed over 2 centuries ago, and has re-surfaced to claim Suraj, her lover from a past life, on the next full moon. The Professor counsels Suraj and even threatens to ensure his disinheritance, but the latter refuses to stop seeing her – not knowing that soon Kiran will ask him to make the ultimate sacrifice so that their souls can be re-united forever – while a gun-toting Reeta is all set to confront and, if necessary, kill Kiran.