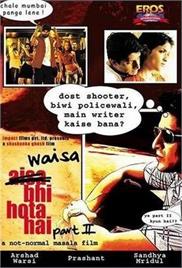 After being asked to leave by his Policewoman fiancee, Agni Sinha (Sandhya Mridul), Punit Sanyal (Arshad Warsi) is lying drunk on a street bench in Bombay, when he comes across a wounded man on the street, shot at by hoodlums owing allegiance to Gangleader, Gangu Tai (Pratima Kazmi). He decides to assist this male, Vishnu (Prashant Narayanan), owing allegiance to yet another crime boss, Ganpat Mohite (Anant Jog). Vishnu and Punit become close friends, though Punit is not asked to participate in any criminal activity. When Ganpat finds out that Punit’s brother was a police informer, and his fiancee a policewoman, he instructs Vishnu to kill Punit, but Vishnu does not do so, and Ganpat issues instructions to have him killed also. In the meantime, Punit is abducted by Gangu Tai and held there. Gangu has taken a liking to Punit, as he reminds her of her son. When the police start an investigation against Gangu Tai, they assign Agni to go and arrest her, which she does. When Gangu is released, she herself has Agni abducted and tied up in her hide-out. Agni is shocked when she finds out that Punit is involved with some of Bombay’s most wanted, and now Punit must decide to stay with Vishnu, Gangu, and Ganpat or else go back to Agni, if so, will the three permit him to do so?