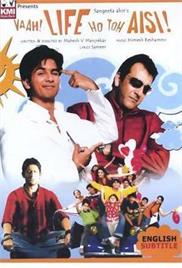 There are lots of Gods in Hindu India. One of the Gods is called Yama, or the God of death. In this case Yama is asked to bring in the lifeless body of a rich Indian called Aditya. Yama does so. On the way, Aditya soul pleads with him to set him free and back to life again, as he has a lot of unfinished business to attend to. Yama refuses to do so. But when Aditya persists, Yama lets him have a second chance. He tells the dead man that he can live, resolve all his problems within a set period of time. Then after that Yama will come again and take his life. Aditya is then sent down to Earth so that he can try and resolve the problems that he had left unfinished. But Aditya finds that he cannot touch anything, and no one can really see nor hear him. So how he is going to solve his problems? Will Yama help him out?Aditya (Shahid Kapoor) is a happy man: his sister is getting married, he is in love with his sweetheart Piya (Amrita Rao) and he has recently invented a new revolutionary car model. But his happiness is short-lived when he dies in an accident and is sent to heaven. He pleads with Yamaraj ‘M.A.’ (Sanjay Dutt), the God-cum-Messenger of death and requests to be sent to earth for some time. Yamaraj accepts his request, albeit reluctantly, and Aditya is sent back to with a new companion: a child who had died on the same day as Aditya. When Aditya comes to know that his family house is being taken over by an unscrupulous builder he wants to fight them. But how do you fight anyone when you aren’t even capable of touching them? Watch Vaah! Life Ho Toh Aisi! to see for yourself.