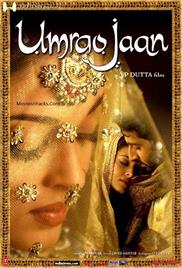 Ameeran lives a poor-lifestyle with her mom, dad, and brother, Jamal, in Faizabad, British India. When her dad testifies against the local corrupt cop, Dilawar Khan, Khan swears to avenge this humiliation, and several years later, abducts Ameeran, holds her for ransom. When no money is forthcoming, he sells her. Ameeran ends up in a brothel run by Lucknow’s Madame Khanum Jaan, where she is taught dance and poetry, and is subsequently re-named Umrao Jaan. Years later, Umrao has matured, is a well-known Courtesan with many patrons, chief amongst them are Nawab Sujat Ali Khan and his son, Sultan. Umrao and Sultan fall in love with each other, much to the chagrin of Sujat, who instructs Sultan either to give up Umrao or to lose his inheritance, and Sultan chooses Umrao. He gives up his father’s palatial house and goes to live in the brothel, but re-locates to live with his uncle in Gadi after being taunted by Khanum Jaan. Umrao has a new admirer, Nawab Faiz Ali, who proposes to take her with him with Khanum’s blessings, to which she agrees after she finds out that their destination is via Gadi. On the way there, she finds out that Faiz is a bandit, who is eventually captured and held by guards, while she is released at Sultan’s behest. Umrao faces more heartbreak when Sultan refuses to have to do anything with her as he suspects her fidelity, forcing her to return to Lucknow. Then she gets an offer to sing at the marriage ceremony in Faizabad. With her hopes and emotions running high, she eagerly accepts this offer – with a hope of being able live as Ameeran again. Watch what happens when she reaches Faizabad and comes face to face with her family.