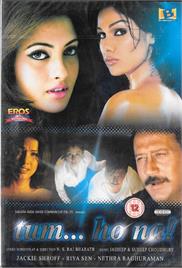 Tall, attractive Anajli, in the company of two female friends in a convertible are stranded with a flat tire. Unable to change the tire, they wait for someone to help them. It is then they see a vehicle head their way, the driver is Jai Walia, a former Major in the Indian Army, and a business executive at present. He assists them, and when Anjali and Jai’s eyes lock – it is love at first sight. Shortly thereafter the two get married and settle down in a life of harmony and love. Then one day Anjali gets a phone call from a woman who cautions her that Jai is having an affair, and she should check his handkerchief for lipstick marks. Anjali does so, and finds lipstick marks on them, when she confronts Jai, he denies ever having an affair with anyone. Then Anjali, on a surprise visit to Jai’s office, finds his Secretary, Mahek, rubbing his back and shoulders. And yet again, she finds Jai in bed with an unknown young female in one of their spare bedrooms. What Anjali does not know is that Jai has had an affair with a drug-addict named Reema, who has a gun with Jai’s finger-prints on them – a gun that was used to kill a man named Mukhtar.