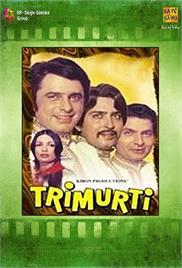 Kalyani lives in a small tenement with three sons, Vijay, Nandu, and Bhola, all of whom are unemployed, slackers and trouble-makers. One day Nandu gets into serious trouble with Shantilal, who summons the police, and has him arrested. Kalyani goes to the Police Station to plead with the In-Charge Officer to release Nandu, to no avail. She then goes to Shantilal to try to persuade him to withdraw the charges, also to no avail. Finally, she approaches Jagannath and tells him that Nandu is actually his biological son. After listening to her story, Jagannath believes her and accompanies her to the Police Station to bail Nandu out. The next day Jagannath comes to take Nandu to live with him in his palatial bungalow, and Deviyani, Vijay and Bhola bid him a tearful farewell. After settling down in his new surroundings, Nandu starts getting arrogant, and selfish, especially toward Vijay. Vijay and he break into fisticuffs, and Nandu warns Vijay not to set foot in his house. When Jagannath finds out, he tries to get Nandu to change his arrogant ways, to no avail. On the contrary Nandu threatens to kill him if he ever speaks in that tone of voice with him. The next night, Jaganath is shot dead. The police begin questioning everyone involved, and the obvious suspect is Nandu. It is then Deviyani tells Vijay and Bhola that Nandu is not really Jagannath’s son, but her very own flesh and blood. Both Vijay and Bhola’s world will never be the same after Deviyani tells them who the real son of Jaganath is, and who may have responsible for killing Jagannath.