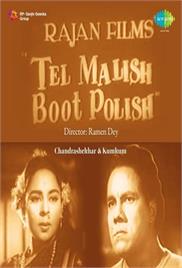 After his upper-caste father marries a low-caste woman, their community shuns them, and shortly thereafter they become parents of Santa and Raja. After they pass away, Santa shines shoes on the sidewalks of Bombay, as well as massages heads. He hopes to make enough money to ensure Raja gets a good education and gets a chance in improving their lifestyle. Raja does pass his matriculation but is unable to get employment as even graduates and post-graduates are unemployed. He then decides to follow in his brother’s foot-steps much to the latter’s chagrin, and ends up working as a mechanic in a garage. He then dramatically meets with upper-caste Brahman Sheel Pandey and both fall in love – much to the chagrin of Girdhari, the garage-owner, who wants to wed her. He threatens to fire Raja, who desperately needs money for an ailing Santa, until the former rejects Sheel. Raja agrees to all conditions – but Sheel refuses to marry Girdhari – prompting the latter to complain that Raja is a low-caste Mochi, and thus paving a successful path for his marriage with her.