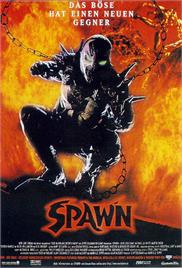 An assassin named Al Simmons is double-crossed and murdered by his evil boss Jason Wynn. Al makes a deal with the devil and returns to earth as Spawn to see his wife. He is ordered by the devil’s minion, The Clown, to kill Wynn. Wynn has made a deal with the clown too and is suppose to destroy the world with a deadly virus that will help start Armageddon and allow Hell to attack Heaven. Spawn must choose between Good & Evil.