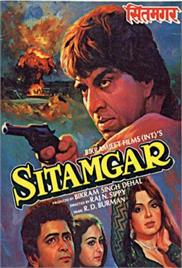 Barely in his teens, Sonu works as a servant in the palatial house of Mr. Nath, his wife and step-daughter, Nisha. One day while ironing Nisha’s birthday dress, Sonu accidentally burns it, earning the wrath of Nath, who places the burning iron on Sonu’s back. Thereafter Sonu is arrested by the Police and taken away. Years later, Sonu has grown up, calls himself Shankar, and makes a living as a bounty hunter. He finds out when hardened criminals are arrested, and while they are being transported to prison, he helps them escape, feeds them, then turns them over to the law for a hefty reward. When Shankar finds out that Jai Kumar has been arrested for killing Kundan, he arranges his escape, and then subsequently goes to hunt him down. It is then Shankar finds out that Jai is Nisha’s sweetheart, and decides to kill two birds with one stone, avenge his humiliation and the scar from the iron he still carries on his back, from both Nisha and her dad, and force Nisha to marry him – or else he will ensure Jai’s arrest and subsequent conviction – a conviction which will lead Jai to the gallows.