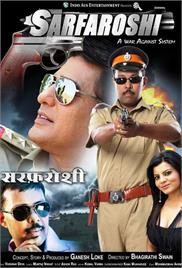 Sarfaroshi – A War Against System tries to raise awareness about the corruption scenario in India. It tells the story of an honest police officer, Om Pradhan, who captures terrorists and prevents further attacks. However, a corrupt politician named Bhanu Pratap uses his influence to make sure that the case does not move forward. It is now up to our hero to expose the minister`s evil ways.