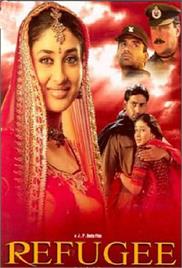 Bihar-based Manzur Ahmed, his wife, his mother, and his daughter, decide to re-locate to East Pakistan after the partitioning of Hindustan during 1948, following the tussle between Sheikh Mujib Rehman and Pakistan’s General Bhutto, which led to the formation of Bangladesh, where Manzur and several other Muslims were forced to re-locate to Pakistan. In order to do this, they cross two borders, one with India and Bangladesh, and the second with India and Pakistan. The route from Bangladesh leads from Dhaka then to Guwahati then to Delhi then to Ajmer then to Bhuj, and then on to Pakistan’s Haji Peer. They get as far as Bhuj, but afterward they are assisted by Jaan Mohammad’s son, known only as Refugee, who helps them trek their way across the Rann desert to Atta Mohammad’s house in Pakistan. Refugee considers his clients as mere items of luggage and refuses to be emotionally involved with them. Then he meets Nazneen and he forgets this rule, and they soon both fall in love with each other. Police on both sides of the border are aware of the refugee traffic and question Refugee and Jaan several times because of this. Then, one day, Refugee assists four men to enter the Indian side of the border. These men then enlist the help of Jaan’s other son to get to Delhi. Shortly thereafter, explosions take place in trains, buses, and buildings. And to complicate matters even more, BSF Officer Raghuvir Singh apprehends Refugee with a load of RDX plastic explosives. While Naaz is making preparations for her marriage with Refugee, her parents have arranged her marriage with a Pakistani Ranger named Ashraf Mohammad. The question remains what will be Refugee’s fate when Ashraf finds out that he is the truth of his wife-to-be, that is if he ever gets out of the clutches of the Border Security Force.