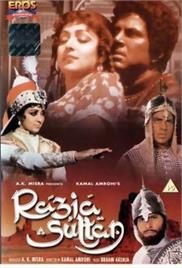 Emperor Sultan Iltames is known for his fairness, compassion, and sense of justice. He takes swift action when he comes to know that his very son has violated the peace, and broken the law, and has him severely and publicly whipped, incurring his wife’s displeasure. The apple of Sultan’s eye is his daughter, Razia, and he would like her to succeed him as Emperor. This decision raises a hue and cry against the emperor, as many are opposed to a woman ruling over them. Razia proves herself to the people by showing herself as much caring, compassionate, and dedicated as her dad, earning the respect of all, and she is accepted as the first ever female emperor of the land. After her succession, the court officials start to gossip about her personal life, and her affair with a Yakut Jamaluddin. The problem is that Yakut is a dark-skinned man, who was the emperor’s slave at one time, but set free and inducted in the army. Razia must now chose between her crown and her love for Yakut.