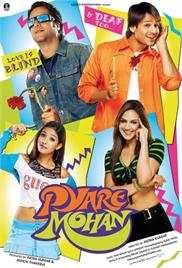 India’s underworld is ruled by Don Tony Fernandez and his brother Tiny. Tony decides that he has had enough, goes to confess in a Church, kills one of his men, and then gets himself killed via a car bomb. What the Indian authorities do not know is that Tony is alive and well, living in style in Bangkok, Thailand, along with Tiny. Then on a flight to Bangkok, a man named Dholakia, fearing that the plane is going crash, confesses to a priest that he is Tony, which is overheard by two sisters, Preeti and Piya Malhotra, who are headed to Bangkok to do a song and dance show. Tony kills the priest, and the police arrest the Malhotra sisters, and if found guilty, both will hang. But Tony is not taking any chances, he asks Tiny to ensure that the two sisters are killed. But hilarious chaos reigns when two former Bollywood stunt artistes, Pyare, and Mohan, intervene to save the Malhotra sisters. The only problem is that Pyare is blind, and Mohan is deaf. And Tony is quite sure that he is going to get away with killing them all.