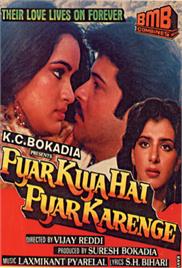 Anand (Anil Kapoor) is a Hindu orphan living with a Muslim guardian, Abdul Rehman (Ashok Kumar), in the Northern-most part of India. Anand is a champion skier, and one day Usha (Padmini Kolhapure) watches him ski, and falls in love with him. When they are introduced, Anand too falls in love with Usha. When Usha’s mom, Annapurnadevi (Sushma Seth) comes to know of this romance, she instructs Usha not to step out of the house without her permission, and forbids her to see Anand ever again. When Anand persists, Annapurna relents and tells them that she will arrange their marriage, but instead she forces Usha to marry the son of N.N. Shukla (Ramesh Deo). When Anand finds out he is devastated, and finds solace in the company of his boss’s daughter, Shobha (Anita Raj). Years pass by, then Anand and Usha meet and tell each other that both are happily married with children. But the tragic truth lies elsewhere.