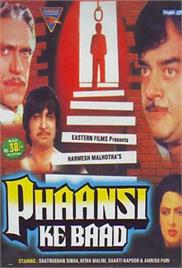 Public Prosecutor Vijay Kumar is the only son of Surinder Nath, who is the DIG of Police. Vijay is quite popular as the only Public Prosecutor to have succeeded in bringing down the crime rate, resulting in the highest number of convictions. He also gets to prosecute Abbas Mohamed Riyaz for killing Inspector Bhagwat and Sukhdev Walia, a former gangster. Abbas is tried, found guilty, and sentenced to be hanged. Then Vijay’s girlfriend, Sapna, finds evidence that it was someone else who was responsible for these killings. Vijay agrees to represent Abbas, find the real culprit(s), and ensure that the sentence is overturned. Before that could happen, Vijay is himself arrested for killing a woman by the name of Neena, thus making Abbas’ hanging a certainty.