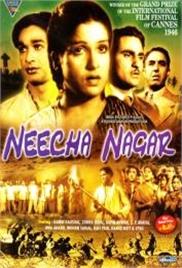 The films takes an expressionist look at the gulf between the rich and poor in the society. The film centers on a wealthy and capacious landlord, Sarkar (Rafi Peer) who lives in a palatial estate high up on a mountain while the poor toil and starve in the valley below. The villagers of ‘Neecha Nagar’ harbor hate for Sarkar and their hatred is fueled even more by the fact that Sarkar plans to direct all the sewage into the village in order to make way for his housing project. The villagers protest this move with their head, Balraj (Rafiq Anwar) leading a movement against Sarkar’s plan. Sarkar’s daughter Maya (Uma Anand) joins the movement against her father and falls in love with Balraj. With the sewage flowing through the village, epidemic starts to spread and the lives of the villagers comes under threat. Can poor people of ‘Neecha Nagar’ survive the greed and wickedness of the rich? Can Sarkar and his malicious ways be put to an end?