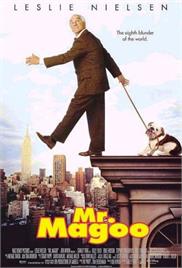 Mr.Magoo is an eccentric millionaire with very bad eyesight who refuses to use eyeglasses and therefore always gets into trouble. During the museum robbery he accidentally gets a priceless gem called the Star of Kurdistan, and begins to trace the way for the arch-criminals whose idea was to steal the gem – Austin Cloquet and Ortega “The Piranha” Peru, while two federal agents Stupak and Anders lead the manhunt for Mr.Magoo himself.