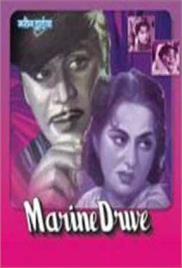 Marine is rightly named the “Necklace of Bombay”, however, some criminal elements have been misusing this street to carry out their smuggling activities. One such individual is Khanna (K.N.Singh) and the other is his sidekick, Ajit (Ajit). On one occasion their gold smuggling plans go haywire, and the entire consignment is confiscated by the police. Owing large sums of money to their creditors, the two hatch a scheme in which Ajit must woo and marry Khanna’s niece, Bina Khanna (Bina Rai), marry her, and then kill her, and take over her wealth and estate. Things go as planned, and Bina eventually falls in love with Ajit. Ajit too starts to fall in love with Bina, and makes his intentions known to Khanna, who has him beaten-up, tied-up, and confined. Khanna then devises his own plan, which includes killing his brother Sunderlal Khanna (Hari Shivdasani), and then slowly driving his niece mad, and he will not let anyone stand in his way.