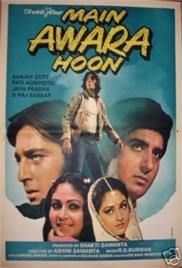 Widowed Dinanath Kumar lives a poor lifestyle in Poona with two sons, Rajeev & Sanjeev; daughter, Payal; and widowed sister, Kalawanti. He has great hopes for Rajeev who he has got educated, but is very disappointed with Sanjeev, who works as a Garage Mechanic with Tahir Khan, and is always disruptive and in trouble. Matters rise to such an extend that the Police arrest Sanjeev for setting fire to the house of Premnath and nearly killing him. Dinanath begs Premnath to withdraw the charges, which he does as he fears that he may be charged for sexually assaulting Payal, and in this way Sanjeev is discharged. Rajeev will not have anything to do with Sanjeev, and asks him to leave the house, despite pleadings from Dinanath and Payal. Sanjeev leaves and re-locates to Bombay, where he initially finds work in a bakery run by Chandulal and his daughter, Bela. After Chandulal accuses him of molesting Bela, Sanjeev meets with Sahir Khan, and starts work as a Mechanic and a taxi-driver. Then one day, one of his passengers is none other than Rajeev. While both secretly acknowledge each other – they do not know that their paths are going to cross again – for both have fallen in love with the same woman – wealthy Archana Prasad – the only child of Ganga Prasad, Rajeev’s employer.