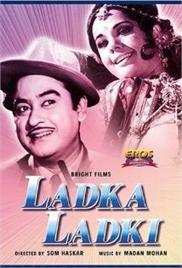 Girdharilal Patwarilal offers two feuding artistes, Asha and Kishore, to come together and form a “Free Club” to entertain people free of cost, to which they agree. Kishore finds out that he has been named as the sole survivor of a small kingdom, and asks his friend, Jagmohan, to go there and make arrangements in advance, leaving Kishore free to visit his ailing mother and a sister, Laxmi, who is child-widow. Kishore would like his sister to get married to Jagmohan. Unfortunately, the people mistake Jagmohan as the crown prince, and make him their king, and get him married to a noble-woman by the name of Nirmaladevi. When Kishore finds out, he is devastated because his sister cannot get married; his mother passes away, and Kishore loses his sanity and is hospitalized in a mental institution. Will Kishore ever get better? Will Laxmi ever get married?