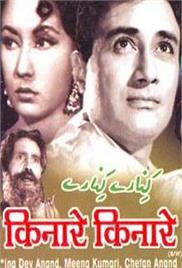 Risking his life and separating from his family from the events of 1947 partition in post-independent India, Puran rescues Neelu and her widower father, Bhairavdas. In turn, the later hires him on his farm in Shikhpur not knowing that Puran is deeply in love with his daughter. Then Neelu finds an injured male, who is later identified as Kamal, and they permit him to live with them. He recuperates and both Neelu and he fall in love much to the chagrin of Thakur Manohar who wants to wed her, and attempts to kill Kamal on two occasions. Bhairavdas wants the police to arrest Manohar, but before that could happen Kamal departs for Bombay, leaving a note for Neelu – clarifying that he is a convicted killer who is on the run from the law, but Neelu does not get to read this note, as Puran suppresses it. Neelu’s health suffers, and she is diagnosed with thrombosis of the heart and must avoid any emotional involvement. Puran is then sent to Bombay to locate Kamal, and he does so. It is here that the latter will come to know of Neelu’s ailment and her refusal to marry him as she knows she is going to die soon. Kamal counsels her to change her mind, and she goes for treatment to Switzerland. After recovering she is all set to return to Bombay and get married to Kamal – little knowing that soon the latter will be arrested by the police on the day of the wedding; Puran will be suspected of turning her husband in – but nothing will prepare for the shocks and trauma that are yet to enter her life.