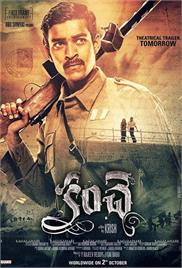 A rivalry between two men, based on caste and social status, extends from an Indian village to war torn Europe during WW2.