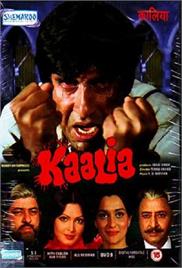 Kaalia – A name that spells terror in the minds of people, and the police but Kaalia was not always like this. Years ago he was a mere simpleton. Living simply in a shanty ch awl with his elder brother, Shyamlal, Bhabhi (Sister – in – law), whom he adored and their daughter Munni. Apart from them there is no one else in Kallu’s little world until one day, an enemy in the guise of Shahani Seth appears. Shahani shatters the happiness in Kallu’s life. That same day the young Kallu dies, and the dreaded Kaalia is born, Kaalia’s main motive in life becomes wealth, and to destroy Shahani. This path of violence leads Kaalia to inspector Raghubir Singh’s jail. Outside of jail, Shahani starts reclaiming his power, and inside jail, Kaalia clashes with Raghubir Singh.