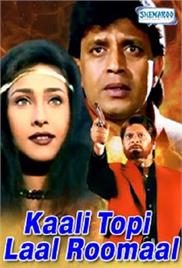 Vijay lives a poor lifestyle in India along with his widowed mom and brother, Raja. When their mom become seriously ill, they do not have money to pay for her medicines, Raja steals some money much to the chagrin of Vijay, who beats him and asks him to leave, but he is unable to save his mother. He decides to return the stolen money but finds the recipient, also named Vijay, has killed himself, leaving behind his near-destitute mother and a sister, Shalu. When told about her son’s passing, the mother has a seizure and is hospitalized. When she recovers Vijay decides to not tell her about her son’s passing and becomes her son instead. He joins the army and becomes a Commando. He single=handedly captures a terrorist, Master D.D., and holds him in a cell. Vijay then meets with Mohini and gets married to her. What Vijay does not know is that Master D.D. is but a mere pawn, the real kingpin behind this gang is an unknown assailant known only as Kaali Topi Laal Rumaal; that Raja, who has taken to petty crime as a career, is part of this gang and had accepted an assignment to abduct Shalu; and to complicate Vijay’s life even more the Indian Army comes across evidence linking Mohini with D.D.’s gang.