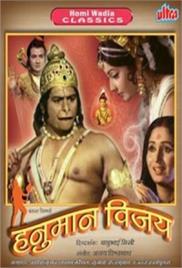 Ahiravan was a powerful sorcerer who had mastered the dark arts, and ruled the netherworld (Patal) with his brother Mahiravan. He was a great devotee of Goddess Kamaksha from whom he had obtained vital occult secrets. After Meghnath and Kumbhakaran are killed in battle, Ravan summons Ahiravan to take care of Shri Ram and Lakshman once and for all. Ahiravan kidnaps both Ram and his brother Lakshman while they are sleeping and whisks them off to his subterranean kingdom Patalpuri where he holds them captive. He left behind, in place of their bed, a dark trail stretching deep into the bowels of the earth. When Hanuman learns of this, he dives into the tunnel and makes his way to Patal. There he finds the two brothers with their arms bound, ready to be sacrificed at the altar of Goddess Kamaksha. With the aid of some unlikely allies and his own wit, Hanuman saves the day once again.