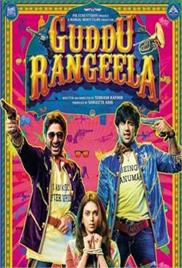 Two cousins GUDDU (Amit Sadh) and RANGEELA (Arshad Warsi) run a small-town orchestra party while moonlighting as informants for local gangs. While younger impetuous Guddu can’t keep his hands off women, Rangeela is still fighting a hopeless court case to avenge the killing of his wife BABLI years back at the hands of local political leader BILLO (Ronit Roy). When a local “PR for the Underworld” ASHFAQ gives them a chance to make quick money to pay off the new corrupt Inspector and to continue their case by kidnapping a young girl named ‘BABY’ (Aditi Rao Hydari) from another city, they don’t realise that they have chanced upon the perfect revenge plan because Baby is the estranged sister-in-law of the vicious Billo. And what’s more, she has an axe to grind against Billo herself. They set off on a road journey which becomes a cat-and-mouse chase between the political power, police force and a budding story of forbidden young love on the run.