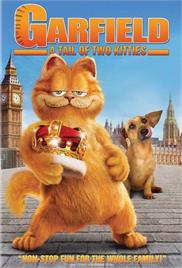 Garfield, the fat, lazy, lasagna lover, has everything a cat could want. But when Jon, in an effort to impress the Liz – the vet and an old high-school crush – adopts a dog named Odie and brings him home, Garfield gets the one thing he doesn’t want. Competition. One night Odie runs away and gets dog-napped after Garfield locks him outside. Garfield, in an out of character move, goes to search for and rescue Odie with the help of a variety of animal friends along the way.