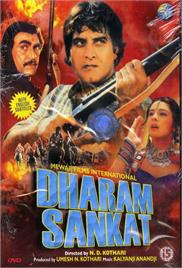 Dacait Jagira (Amrish Puri) has terrorized the entire country-side with his raids and cruelty. On one such encounter he kills Gopal’s mother, leaving him an orphan. Durga (Rohini Hattangadi) takes care of Gopal and raises him as her own son, Birju. Years pass by, Gopal (Raj Babbar) and Birju (Vinod Khanna) have grown up. While another band of dacaits is raiding their village, the leader Sohn Kanwar (Sahila Chaddha) is about to kill Birju, when she is told that his mother is Durga, and she spares him, due to Durga being the wife of Dara (Dara Singh), another dacait. This revelation unleases a tide of hate against Birju and Durga, and they are forced to leave the village. To make matters worse, Gopal disowns any relationship he has had with both of them, and wants to marry Madhu (Amrita Singh), who loves Birju. Gopal becomes a police inspector, and Birju is forced to bear arms and become a dacait. Birju also brings Madhu with him, and this does not fit in with Sohn Kanwar’s plans that she has for Birju. To make matters worse, the Police Commissioner (Vikram Gokhale) issues a substantial reward to bring in Birju dead or alive.