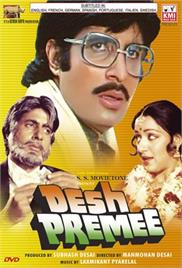 Master Dinanth (Amitabh Bachchan) is a freedom fighter and led the war against the British in 1942 and eventually won the independence in 1947. But after independence, the people’s love for their country seems to be diminishing and they are too busy betraying it like rich businessman Thakur Pratab Singh (Amjad Khan). Masterji finds out about Thakur Pratab Singh’s illegal activities such as smuggling of weapons and ammunition and gets him arrested. In revenge for putting him in prison, Pratab Singh gets Masterji’s wife Bharati (Sharmila Tagore) and daughter Priti (Parveen Babi) kidnapped by Thakur’s partner in crime Sher Singh (Kader Khan) to try and change his ways but to no avail. Thakur also provokes an attack on Masterji’s home by the local villagers who accuse Dinanath of betraying his country and he is forced to flee his home with his young son Raju. His wife becomes a victim of leprosy and escapes from Sher Singh leaving her daughter Priti in a friend’s care. Masterji is informed that his wife and daughter could be dead as they find a necklace of hers near the train tracks. Masterji is devastated by his wife and daughter’s loss and he and his son move on with their life. They settle into a slum called Bharat Nagar which is divided in 4 sections with a don in each one of different backgrounds: Punjabi (Shammi Kapoor), Madrasi (Premnath). Bengali (Uttam Kumar) and Muslim (Parikshat Sahni). All of them love their own section but nobody thinks of themselves as Indian except Masterji. Masterji sets out trying to bring peace between the four dons and once they settle their differences the four underworld dons use the Masterji’s stay in Bharat Nagar to cover up their own illegal activities. Fast Forward to 15 years later the year is 1962 and Masterji’s now grown-up son Raju (also Amitabh Bachchan) turns out to be the opposite of his father by being draw into the underworld committing crimes to earn money with his father unaware of what he does. He starts working for Thakur Pratab Singh unaware that Thakur had once kidnapped his mother and sister many years earlier which caused their separation. Will Raju find out what Thakur did to his family, will Master Dinanath find out his son is not what he thinks he is? and will Master ever find his wife and daughter again?