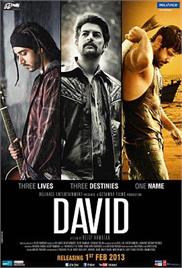 The story is about two Davids. David (Vikram) is a 30 year old fisherman living in Goa. David who is a carefree drunkard getting involved in pub fights and other unwanted activities falls for his friends deaf and mute fiancé Roma (Isha Sharvani). Meanwhile, the other David (Jiiva), is a 19 year old guitarist living in Mumbai. He hates his dad Father Noel (Nassar) for his philanthropist attitude. Meanwhile, an MLA attacks his dad and beats him up mercilessly with a group of people accusing that Noel is trying to convert everyone into Christianity. David learns that it was for the purpose of cheap publicity and he goes on trying to reach her. The two Davids are about to take a decision which will change their lives forever.