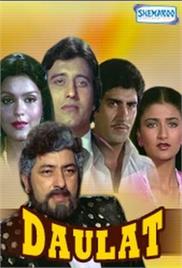 Honest mint employee, Ghanshyam (Shreeram Lagoo) gets framed for murder by Joseph D’Souza (Amjad Khan), and has to flee from the police. He is separated from his wife, Radhika (Seema Deo), two sons, and a blind daughter. Years later, Ghanshyam, after being forced to work for Joseph to print fake rupee notes, is rich and known as Vikram Singh; his daughter and wife are homeless and destitute; his elder son, Ravi (Vinod Khanna) is a burglar at night, and a rich and respectable man named Kunwar Dilip Singh during the day; his other son, Sushil (Raj Babbar) is a police inspector, adopted by the Police Commissioner (Om Shivpuri). Joseph, now known as Tripathi, comes to know that Ravi is Ghanshyam’s son, and devices a scheme that will bring certain death to Ghanshyam and his family.