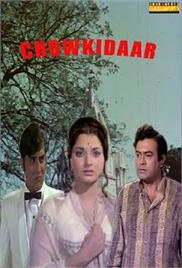 Chowkidar in English is “watchman” or in looser terms, custodian of village security………. Rural India in the ‘seventies still had a dynamic that traces its roots to hereditary large land ownership called Jagir; and the master of the Jagir is called Jagirdar…… Typically the Jagirdar had wealth, guns and thugs to enforce his will on the people of the village…… Typically the Jagirdar owned everything that he casts his eyes on, including nubile women of the village….. His silky partner in crime is usually the money-lender who smoothly extracts property, jewellery and other assets from the simple farmers, or for that matter share-croppers, when their crops fail, or some other event upsets their precarious financial condition……………. This is a story of feudalism in it’s raw state. Since this film is a product of the seventies, horse drawn carts (tonga) and a certain simplicity of the village folk is exploited by the Jagirdar and his cohorts….. In comes the only son of the money-lender, a doctor (Sanjeev Kumar)who initially obtains goodwill by curing people, and providing financial assistance for recovery……. But then the long arm of the Jagirdar, his ability to incite the villagers develops the plot of the movie……. With his thugs,he is able to frame the Chowkidar, the doctor and threaten the well being of two women……… The Jagirdar has to deal with the sins of his father, and will he be able to be a man, acknowledge the crime of his father is the story that is pretty much worth a watch.