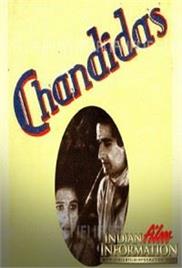 K.L. Saigal stars as Chandidas and Umasashi as Rami, featuring several of their popular duets (e.g. Prem nagar mein banaongi ghar main) and other songs with Sanyal. This film is about Chandidas, a legendary 15th-C. Bengali Vaishnavite poet whose biography remains obscure but was an influence on the better documented Chaitanya (1486-1533), a school teacher who promoted the Vaishnavite ideology in Bengal, mostly through hymns about the Radha-Krishna legend. The film stressed the poet’s teachings through the love story between Chandidas and a low-caste washerwoman, Rami. The conventional villain of the saint film genre, who represents the established order threatened by the outsider’s revolutionary influence on common people, is the rapacious upper-caste merchant Bijoynarayan. When Rami rejects his advances, he persuades the high priest to insist that Chandidas must repent or be punished for associating with a low-caste woman. Chandidas agrees to repent but when he sees the injuries Rami has suffered at the hands of the merchant’s goons, he rejects institutionalized religion in favor of the higher Vaishnavite call for a more democratic god and leaves the village with Rami.