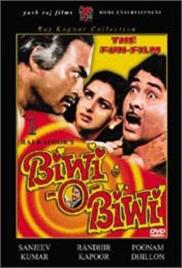 Singer Chandermohan is born in a well-off family and is the only child. Since he is of marriageable age, both he and his parents want him to get married. But since he was born with a strong & adverse influence of Mars (Mangalik) during his birth his horoscope has not been compatible with any suitable woman. On his friend’s Gafoor’s, who has two wives, advice he re-locates to Bombay, sings at the Tejpal Auditorium, meets and falls in love with wealthy Asha, who lives with her widower dad, ironically named Colonel Mangal Singh and her paternal grandma. Mangal would like Asha to get married to an army officer. His attempts fail and Asha and his mom convince him to let Asha, who is also Manglik, get married to Chandermohan. He reluctantly falls in line with them, but then a series of events makes everyone change their mind about Chandermohan, namely a fake astrological chart that shows he is not Manglik, and his accusations about Mangal, who he alleges is leading a double life, romancing, wooing, and having a child with wealthy Nisha, Nirmala from Jeevan Saathi matrimonial bureau and Rina respectively, apart from being an alcoholic, robbing Chandermohan, stealing from his own house, and exhibiting goon-like behavior. Hilarious chaos results as Mangal’s mom and daughter attempt to figure out why Chandermohan is spreading these tall tales about their son and father respectively.