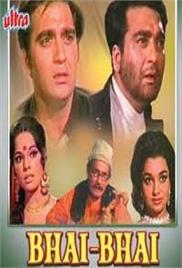 Deep Sharma lives a very poor lifestyle with his widowed mom, Radha, and a younger brother, Ashok, who he would like to become a Judge. Unable to fend for themselves in the small town, Deep relocates to Bombay, where he attempts to sell poetry, to no avail. Then he is asked to write stories about an imaginary bandit, Sangram Singh, which he agrees to do so under the pen name of his friend, Jani Babu. Shortly thereafter he gets very popular, so much so that his girlfriend, Lajwanti’s dad, the former King Maheshwari Prasad, consents to let him marry his daughter. Then things get complicated when a bandit who calls himself Sangram Singh goes on a crime-spree throughout the region. The Police launch a man-hunt and their investigations take them to Jani Babu, and after questioning him, they find out that the writer is Deep. Before they could arrest Deep, Maheshwari is killed in his home, and the Police are notified that Deep is the killer – and the witness identifying Deep as the killer is none other than Lajwanti herself. The questions that come to mind are did Deep really kill Maheshwari; and has he been living a double life?