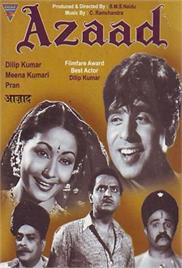 After her widower dad, Kedarnath, passes away, Shobha goes to live with his friend, Charandas, and his wife, Shanta, who had their son go missing as a child. Years later Shobha is now matured and Charandas scouts for a suitable groom. A wealthy man, Sunder, would like to marry Shobha, but the family detests him. Then one night Shobha is abducted. The Police are informed but their search is in vain. A few days later they get wind that Shobha may be in Sunder’s custody, a search does prove to be in vain. Then Shobha returns home and tells them she was rescued by a wealthy man named Azaad, housed in a mansion, looked after very well, and brought back home all in one piece. They subsequently find out that the wealthy man is none other than a notorious bandit named Azaad. They are even more shocked when Shobha informs them that she wants to get married to Azaad. Will Charandas and Shanta permit her to marry a bandit?