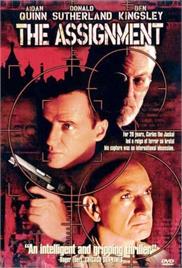 1986. In his civilian clothes while on shore leave in Jerusalem, Lieutenant Commander Annibal Ramirez of the US Navy is captured and interrogated by who he eventually learns is Mossad in a case of mistaken identity. Because of the resemblance, they believed him to be Carlos the Jackal, one of if not the most wanted and dangerous terrorist in the world. Shortly following, Henry Fields, using the alias Jack Shaw, he the Paris deputy chief of CIA counter-terrorism whose primary mission for at least the past ten years has been to get rid of Carlos in any way possible, tries to recruit Ramirez to work on a covert CIA-Mossad operation to stop Carlos’ terrorist activities with the ultimate goal of Carlos’ capture or death. The plan is for Ramirez to impersonate Carlos, in the process discrediting Carlos in the eyes of his current KGB backers, and thus effectively ending his career as a terrorist, with nowhere he can longer hide. After an initial reluctance on Ramirez’s part, Shaw is able to convince him to do the job. The rigorous training is to ensure that Ramirez not only looks like Carlos, but instinctively behaves like Carlos, even to those closest to him, which also means how he makes love as one of Ramirez’s interactions is to be with one of Carlos’ old girlfriends. Beyond the potential problem of getting caught by Carlos or his associates, Ramirez may have problems stomaching his work and reconciling it with his real life as a military man. If he is able to carry out the mission and survive, the bigger question becomes whether being Carlos will have transformed his inherent being permanently.