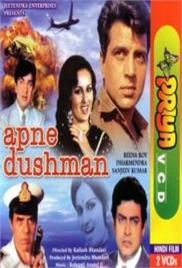 Brijesh is an airline pilot. While on duty one day, he comes across some men who are smugglers, and after a short tussle with them, he hands them over to the police. A lipstick containing a deadly secret is left on Brijesh’s person, which he unknowingly takes home. He lives with his blind sister, Reshma. Reshma is not really his sister by birth, for he had rescued her when she was being molested. The gangsters find out that the lipstick is in Brijesh’s house, and Reshma alone at home, and they sent their operatives to locate the lipstick and if necessary kill Reshma. How is Reshma going to defend herself, when she cannot see the person(s) who have found their way inside, and will do anything to obtain what they have come for. The Mohammeda Rafi song “Ish Desh ke socho kya hoga, ab hum kaise batlayen, jab apne hi gharwale, apne dushman ban jayen…” continues to be banned by India’s Government-owned media.