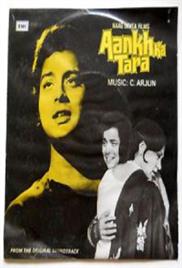 Ramlal and his wife, Parvati, had always longed for a child of their own. With blessings of Maa Santoshi, Parvati gives birth to a baby boy, and calls him Makhan. Shortly thereafter, Ramlal passes away, leaving Parvati to bring up Makhan on her own. Parvati has to seek employment, and must leave Makhan on his own, and as a result Makhan gets involved in an accident and loses his vision. Subsequently, Parvati and Makhan get separated. Years later, Makhan now calls himself Mohan and is a popular radio singer, and is still blind; while Parvati lives with a brother-like friend, Ashok Gupta, who also has a young daughter, Geeta, who is a fan of Mohan. Geeta wants to marry Mohan, and brings him over to introduce him to her dad, and Parvati, but both reject him. Disillusioned, Mohan returns home, while Ashok and Parvati arrange the marriage of Geeta with another young man. But complications arise, when Geeta claims she has lost her sight, and is herself rejected by the young man and his family. The question remains, will Ashok accede to the marriage of Mohan and Geeta? How will Parvati find out that Mohan is really her son?