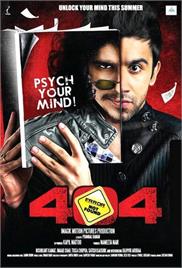 Abhimanyu enrolls himself in a medical institute and gets a room in the hostel. He finds that ragging is rampant, initiated by Chris and other seniors, on vulnerable freshers so much so that three years ago a student, Gaurav P. Gupte, killed himself. When he himself becomes a victim, he speaks out and complains, only to have his room trashed. He then requests that he be moved to Room 404 – the very room that was occupied by Gaurav. The authorities initially refuse as the room has been under lock and key since the suicide and no one dared to occupy it. But Abhimanyu insists and assures them that this will remove the myth associated with it, and he is accordingly permitted to do so. Shortly thereafter, he will start to hallucinate about not only seeing but also speaking with Gaurav. When he shares these with his friend, Neha; and Professor Aniruddh and his wife, Dr. Meera, they express disbelief and are convinced that he is suffering from a mental disorder. Despite of this opposition, he continues to believe that Gaurav’s spirit is still occupying the room and sets about to prove it to the faculty.